The official certificate issued by IJCC

The Elegant Monkeys is awarded the Prize for innovation and for connecting human with technology in honor of the late President of Israel Mr. Shimon Peres.

An innovation award in honor of the late President Shimon Peres was given to the Israel startup The Elegant Monkeys (TEM). The ceremony took place as part of the annual conference for “excellence in business” between Japan and Israel conducted in Tel Aviv, Israel (6th of December 2016). The award was given to TEM executive by the daughter of President Peres, Prof. Zvia Valden.

The innovation award has never been given before to a startup company. The award committee mentioned that the award is granted to TEM “for innovation and for establishing connection between humans and technology”. The award is given in light of the success of TEM to penetrate the Japanese market as an Israeli startup and for its vision: to translate human emotions and mental state to digital information. TEM’s technology (KENKO) is aiming to address acute needs in preventative healthcare and in modern work culture.

TEM got recognized following the warm recommendation given by Mr. Yony Golan, head manager of Samurai Incubate Israel and member of the Israel-Japan Friendship Society and Chamber of Commerce (IJCC). Mr. Golan is known for leading and initiating projects to tie up the business connections between Israel and Japan.

As part of the ceremony, Prof. Valdn told about the meeting between her father Predient Peres and TEM: “Not so long time ago, just before my father’s trip to meet the Pope in Italy he had a meeting with The Elegant Monkeys. It is  a startup with a vision to provide treatment to people using technology and human emotions. My father liked their idea very much and he mentioned that in his vision many emotion related problems will be solved through technology. Therefore, it is not a coincidence that TEM were chosen to win the award”.

From TEM founders it was mentioned that it is a great honor to receive such award. Granting award to an Israeli startup is symbolic in many ways in light of President Shimon Peres vision to grow the Israel economy with innovative technologies. 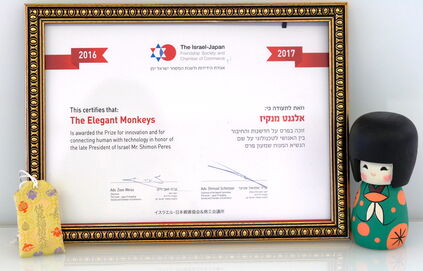